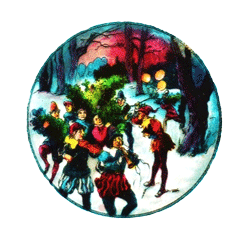 Cyril Mistletoe.
Night watchman and Bellman to the gentry. As well as being a purveyor of traditional Christmas festive music and hearty greetings for Christmas, Cyril is also available for other occasions throughout the year. Cyril is well elevated upon his ladder which, can on request, bare the name of the County, City, Town or Village in which he is summoned to be about his business. Not only will he ‘call the hours’ but can be prevailed upon to entertain with music, magic, juggling and a story or two.

Cyril is a friendly Festive Dickensian character who keeps the old traditional Christmas alive with his vast repertoire of Christmas carols amongst other tunes that take his fancy played on the pipe and tabor. The Pipe and tabor is a pair of instruments played by a single player, consisting of a three-holed pipe played with one hand, and a tabor (small drum) played with the other ‘A one man band above the rest’.
Truly a traditional Christmas sound in the time of the Christmas Waits.

Ideal for Schools
Can include adaptations of;
The Nativity
The Forth Wise Man
Clown of God
Gwain and the Green Knight
Gwain and the Loathsome Lady

The custom of telling stories at Christmas is a very old Christmas pastime, especially on Christmas Eve when it was also traditional to tell ghost stories. It is said that such Christmas storytelling inspired Charles Dickens to write the wonderful Christmas story ‘A Christmas Carol’ which introduces not only the ghost of Jacob Marley but also the ghosts of Christmas Past, Christmas Present and that of Christmas Yet To Come.

Peter is one of a few professional Essex storytellers who not only takes storytelling into schools within the Essex County but takes his storytelling skills to schools, libraries, Churches, Festivals and various other venues in many other counties also.

From its conception 41 years ago Peter has been a stalwart contributor with Storytelling, music and song for the annual Traditional Folk Carol Service in Leigh-on Sea in Essex. He has now for many years been its director. The author of a few Christmas Carols he has had one published, the ‘Wrens Carol’ in the ‘A Book of Folk Carols’ compiled and edited by Paul MaDowell and Kenneth Mackinnon.
ISBN 1-904181-49-X

Peter is also the author, composer of ‘A Carol for Leigh’ which has found its way into the annuals of local tradition now sung every year on Strand Wharf as part of the local Christmas festivities. In the past, amongst other things Peter has written lyrics and devised music for professional productions of the ‘Wakefield Mystery Plays’ and ‘The Passion.’ as well as a BBC Radio Christmas production in 1987 of his written work ‘Long Gone Are the Days’ In 1990 he devised music for and directed a schools touring Christmas/Winter production of ‘The Selfish Giant’ for the Palace Theatre Westcliff alongside his own play ‘The King Who lacked Confidence’. In 1995 he wrote an adaptation of ‘Gawain and the Green Knight’ for Christmas performance Palace Theatre Westcliff.
(Yet to be performed)

All other counties also considered

In all cases Clients will be requested to confirm bookings by letter, e-mail or formal contract.

Peter Optical has over 40 years experience in Theatre and the associated arts at home and abroad and has had work performed on stage and radio. Equity Member/Public Liability Insurance/Standard & Enhanced CRB/DBS disclosure Certificates.